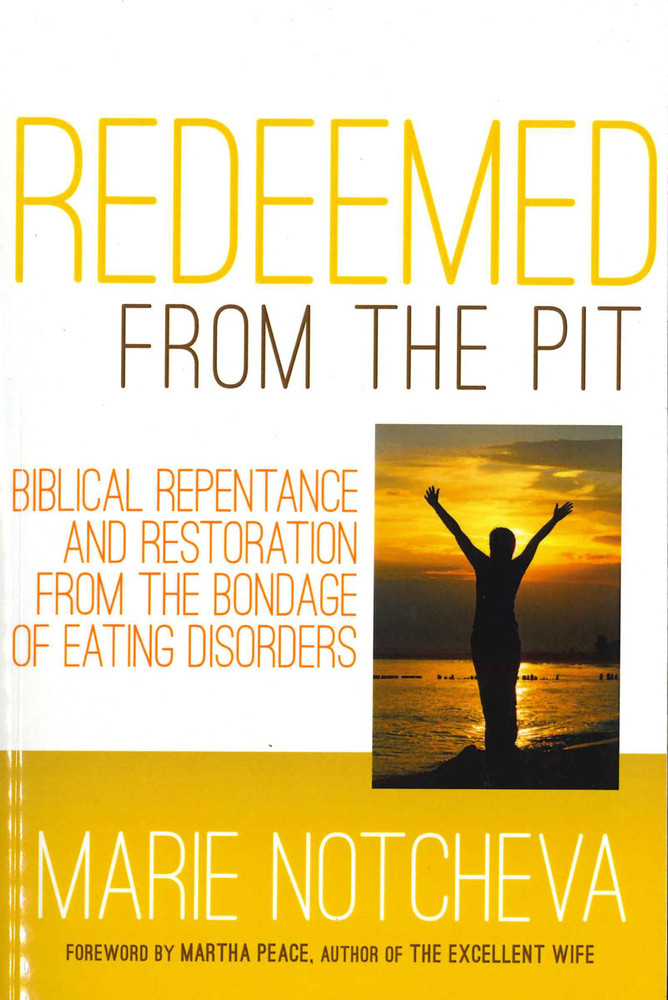 Redeemed from the Pit

Biblical Repentance and Restoration from the Bondate of Eating Disorders

Up to 3% of ALL adolescents in the United States have symptoms of bulimia.  5-15% of ALL adult women show the same signs. Are you one (or do you know someone) of the literally thousands who suffer from an eating disorder, most likely bulimia? Do you see yourself as fat and unattractive? Do you feel as though you don't "fit in" and suffer from periods of deep depression? Has binging on food and then purging become a daily part of your routine?

HERE IS HOPE! Drawing from her own experiences with the disorder, author Marie Notcheva shows you how to overcome this life-destroying habit. No, not by some contrived "self help" system--but by the power of the Lord Jesus Christ! Notcheva believes that the person suffering from an eating disorder is not a victim of a "disease"; it is not something that has befallen them or has been thrust upon them. Rather, the bulimic became so by a series of choices. They chose to feel a certain way about themselves. They chose to start on a path of behavior that leads to a destructive habit.

Likewise, those suffering from bulimia can start making correct choices. They can make the choice to believe that their behavior is sin, not a disease. They can believe that the Bible is the Word of God, and that by trusting in the sacrifice of Christ for sinners, they can have new life--and that they can have victory, not only over bulimia, but over the greatest threat of all: eternal destruction.

This book may indeed prove to be a "life saver" to many. It will certainly give tremendous hope to all who read it.

Since Mother Eve fell into sin, almost all women, Christians or not, have desired to be beautiful. Different cultures, over time, have defined beautiful in different ways. Remember the bee-hive hairdos of the 1960's? Ancient Roman women thought that beautiful, too! Well, the bee-hive went out and thin came in.

Today, we are greatly influenced by the media to think that the only truly beautiful women are thin; very thin. We want to look like the movie stars, news anchors, and models that are almost always super-slim. I once heard about a movie star who on a very long air flight refused all the meals. On occasion, however, she would become so hungry she would insist on something to eat, eat two bites, and refuse the rest. She was thin and she was beautiful, but I wonder if her almost-starvation diet was worth it in the long run. She struggles with anorexia.

Another may not starve herself; in fact, she may often be gluttonous, but maintains her weight by throwing up after the meal. Sometimes her compulsion is repeated several times per day. She struggles with bulimia.

It was forty-plus years ago in nursing school that I learned about eating disorders. As I recall, it was the first time I knew that eating disorders existed. Both were said to be psychiatric diseases and both, especially anorexia, were difficult to treat. What must have been rare back in the 1960's is now, for many, a common practice. The quest for beauty which likely began with Mother Eve has not gone away. It is still labeled a psychiatric disease and anyone struggling with an eating disorder knows what Marie Notcheva means about being in the "pit" and "in bondage."

Redeemed from the Pit: Biblical Repentance and Restoration from the Bondage of Eating Disorders is a gift from God to those struggling and to those helping someone struggling with an eating disorder. This book maintains a high view of God and an accurate view of man. It is written in an engaging style and entwined within it is Notcheva's own personal struggle and how God granted her repentance and real freedom. As a biblical counselor to women, I am looking forward to using this book to help others. Read it prayerfully and thoughtfully. You, too, can, by God's grace, be truly redeemed from the pit!

Martha Peace, Biblical Counselor and Author of The Excellent Wife

Addictions, A Banquet in the Grave

This is a new purchase for us - but we really think this will be one of the resources we use extensively for &#039;addictions&#039;. This book reads quickly and is an easy to understand book. She uses the scriptures powerfully and we are looking forward to adding this to our Counseling Center.

This resource gives a window into the thinking that goes on with eating disorders. The author primarily deals with body-image driven motives, but this is very useful information for helping deal with this area no matter the motivation driving the eating disorder.